A bathroom with a view: Tokyo unveils transparent public toilets 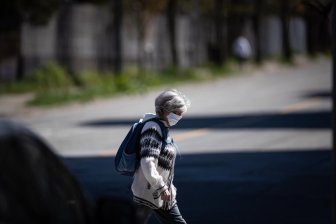 The fixtures opened in the city’s Shibuya neighbourhood earlier this month, where they’re already attracting visitors who are eager to see how they work.

Each restroom is a glass case of defecation, with a toilet, sink, accessibility measures and all the other amenities of a public bathroom — including the privacy.

The restrooms are made from a special “smart” glass that automatically frosts over when a person engages the lock, granting visitors the chance to defecate in peace.

In other words, you can see into the toilets before you go in, but others can’t see you while you conduct your business.

The transparent bathrooms are part of the Tokyo Toilet Project, an initiative run by the non-profit Nippon Foundation to build 17 new-age toilets throughout the city. Sixteen different artists designed the toilets, but architect Shigeru Ban appears to have captured most of the attention with his glass designs.

“There are two things we worry about when entering a public restroom,” he wrote on the project’s website. “The first is cleanliness, and the second is whether anyone is inside.”

Ban’s bathrooms are designed to solve both of those problems. Visitors can peek inside without touching the door, and they can shut out the world with a flick of the lock.

He adds that the bathrooms are especially nice at night, when each one “lights up the park like a beautiful lantern.”

Both bathrooms are located along the western side of Yoyogi Park in Shibuya, Tokyo.

Several English-speaking video bloggers have already shared footage of the toilets in action on YouTube. The glass appears to switch from transparent to opaque in milliseconds.

Other designers came up with a “squid toilet” and a bright red toilet inspired by Japanese decorative wrapping.

The Nippon Foundation says it backed the project because toilets are a “symbol of Japan’s world-renowned hospitality culture.”

The foundation says it will work with the city’s government and tourism association to ensure that the facilities stay clean.

The remainder of the project’s toilets are slated to open next spring.