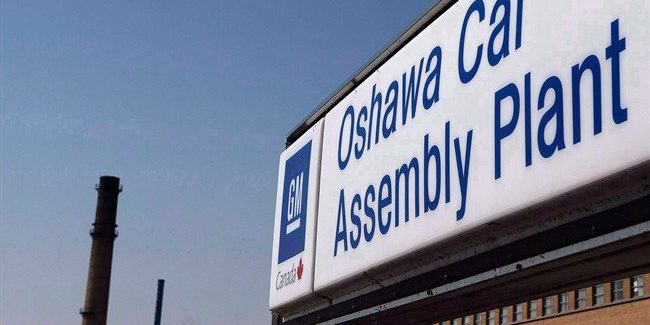 DAVOS, Switzerland – Canada’s economic development minister says the federal government has received no firm commitments from General Motors about the future of a key plant in the Greater Toronto area.

Navdeep Bains spoke this morning with Mary Barra, CEO of the General Motors Company, just before she had a closed-door meeting with Prime Minister Justin Trudeau at the annual meeting of the World Economic Forum.

Bains said the government made the case for GM to keep its plant open in Oshawa, trying to play up Canada as a high-tech hub and Ontario as an automotive centre. He said the company didn’t give the government any specifics about the future of the Oshawa plant, which has an uncertain future past 2017.

The plants used to produce the Chevrolet Camaro until General Motors moved production of the car to a plant in Michigan, costing about 1,000 employees their jobs in November. The company is to stop producing three other cars on the assembly line — the Chevy Impala, Buick Regal and Cadillac XTS — this year.

The company has previously said no decision on the plant will be made until after it concludes union negotiations this year.

Bains said the government made the case for the GM to keep its plant open in Oshawa, trying to play up Canada as a high-tech hub and Ontario as an automotive centre.

‘These decisions by companies are not made on the spot. What they’re looking for is a government that’s willing to work with them’

“These decisions by companies are not made on the spot. What they’re looking for is a government that’s willing to work with them, to partner with them,” Bains told reporters.

“We made it very clear that Canada is open for business, that we’re a willing partner in that and as they plan production, as they plan their buisness plan for the next two to three to five years, that we’re part of that business plan, that we are given serious consideration.”

The federal and provincial governments helped keep the plant running during the economic downturn of 2009 by pumping billions into GM to keep it afloat — and maintain jobs in Ontario. The federal government sold its more than $3 billion in the companies last year to pad the bottom line.

READ MORE: Anxiety in the air as Davos World Economic Forum kicks off

Bains said Barra was thankful for the financial help. He said the company hasn’t asked for any more money beyond what the government offers to carmakers.

Bains said talks with GM and other automakers has focused less on horsepower and more on the technology being produced in Canada that would help build self-driving cars. He said the Liberals plan to be an activist government to help companies, and felt confident that the face-to-face meetings happening in Davos are going to pay off.

Helping the Canadian contingent is that Trudeau is a political celebrity at the meeting and his officials want to take advantage of the doors that status opens by getting him as much face time as possible with international power brokers.

While the meetings don’t end with any specifics — such as firm commitments for spending — government officials see them as an opportunity to sell Canada to foreign companies who can move their spending and investment to the jurisdiction where they can find the highest return.

The results may not be seen immediately after Trudeau leaves Davos, but may only be seen weeks, months or years later with the genesis of the investment starting here in the Swiss Alps.