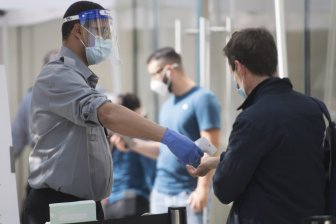 The city of Hamilton is asking for public input about one of its most popular waterfalls.

On Wednesday, the city launched a survey to gauge how much interest there would be in the construction of a new viewing platform at Albion Falls.

The new access point would be on the south side of the falls in the city’s east end, and would also include stairs and elevated boardwalks and benches, as well as an east-west pedestrian crossover on Mountain Brow Boulevard.

“The goal of this project is to provide a safe access that improves views of Albion Falls for residents while maintaining and protecting the site’s natural and cultural heritage,” reads a release from the city.

The north viewing platform and the associated trails and parking area were built in 2005.

Since then, the city said it’s been working with Ward 6 Councillor Tom Jackson, as well as a group of residents and community stakeholders, whose input has shaped the design of the viewing platform.

The survey will be active until Feb. 22 and can be found on the city’s website.