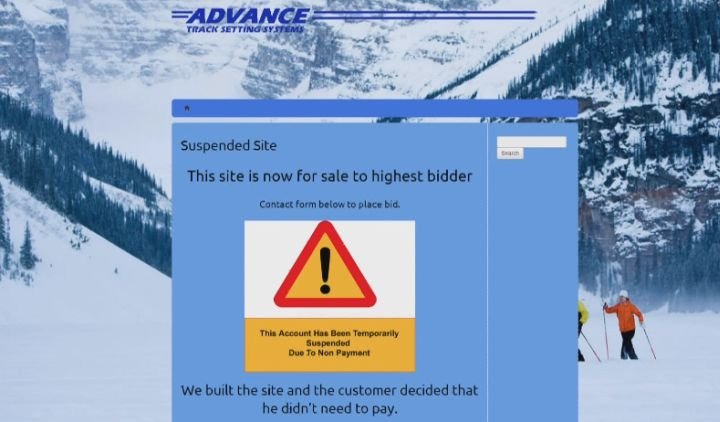 EDMONTON – A Strathcona County business owner says his company’s website was hijacked by the web design company he hired to maintain it, and he’s losing business as a result.

Rick Potts is the owner of Advance Track Setting Systems, a company that makes grooming equipment for cross country skiing. As a part-time, seasonal business, Potts says he relies on his website to stay afloat.

“I probably get 98 per cent of all my customers through the web.”

At least that was the case until a couple of months ago, when Potts says his site was taken over by TRi-D-FX. While Potts originally hired a student to design his website, he has been working with TRi-D-FX for the past nine years when it comes to maintaining and updating his site.

“I had given them access to change some of the pictures, pricing, that kind of thing,” Potts explained. “He said [TRi-D-FX] was going to tweak the site a bit so it ‘spidered with the search engines.’ I don’t know what that meant, but I’m assuming it’s going to work better so I said ‘okay, fine.’”

But Potts says when he saw the end result, he wasn’t happy with it.

“When it appeared, it was a totally different website — new front page, my pictures were gone,” he said. “It wouldn’t load properly, the pictures weren’t popping up, there was spelling mistakes. [TRi-D-FX] even had the name of my company wrong… I actually got sick to my stomach.”

Potts says he wasn’t about to pay the $1,500 bill until the website was made to look the way he had requested it, and after refusing to pay, Potts claims TRi-D-FX locked-down his site and put it up for sale.

“He had changed all of the domain names into his name — the registrant, the administrator. And I’d been hacking away at that for a month trying to get the website back into my name.”

TRi-D-FX provided Global News with information on its side of this dispute, but then refused to give us permission to share any of it in this story.

Craig Sherburne, who practices intellectual property technology and patent law in Edmonton, says it seems as though the web design company is trying to force a lien on Potts’ website. However, Sherburne says even if money is owed, Alberta law does not support this type of activity.

“A web address, domain names, passwords, that doesn’t fulfill the criteria,” he said. “The case law… out of Alberta and Ontario, judges don’t actually see it the way the web developer sees it. They do see the keeping of the passwords as being a conversion of property and that they’ve done wrong and they will actually hold them accountable for damages.”

“What needs to be in place is stipulations, penalties for late payments, things like that. Stuff that’s all decided before you sign a contract,” said co-founder Jeff Archibald.

Archibald says having a kill clause in the contract is also important.

“A good contract will have a kill clause in it where I can say ‘you know, I’m just not happy with the work that’s being done. I want to pay this fee’… and that will end the contract, end the relationship and the end client will get the work that’s been done to date and they can take it off to another shop or they can throw it in the garbage.

“Taking that approach to hijacking a site, I don’t think is very professional,” Archibald said.

Both Sherburne and Archibald urge businesses to maintain ownership of the company’s domain.

“My big advice would be keep control. Keep control at all times,” Sherburne said.

“You can have someone else buy it for you, but it needs to be set up under your name and you need to have that log in domain access information. If you don’t, then technically whoever set it up owns it. And that, you’re kind of leaving yourself open to a world of hurt,” Archibald added.

Potts says he’s learned his lesson, but will be taking legal action against TRi-D-FX. In the meantime, he’s changed his company’s name to Advanced Track Setting and is in the process of setting up a new website.

“I’ve bought my own domain names now and I’m learning that curve. I’m getting a crash course in IT and law.”