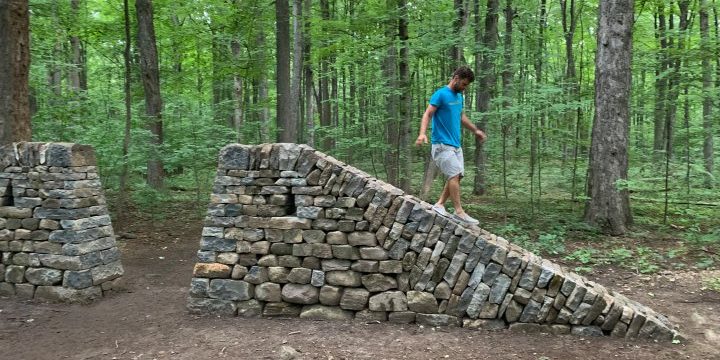 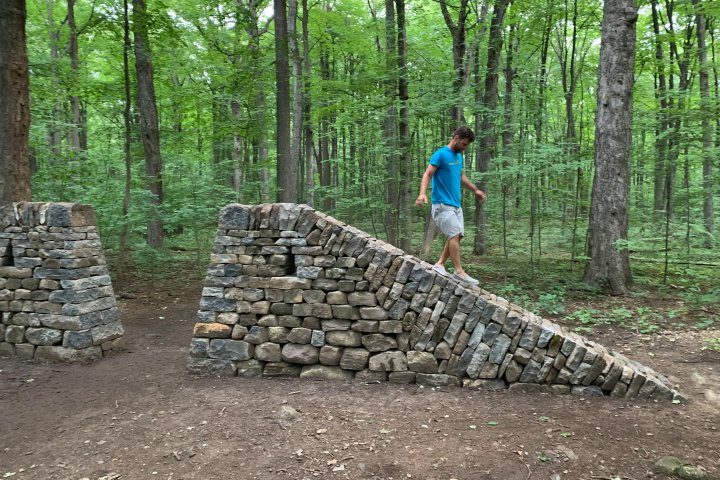 Thirty-two tons of stones, stacked by hand one at a time, seven-feet high.

That’s how a medieval-looking stone wall, called Angellstone, was built in Beaconsfield’s Angell Woods. It’s an art installation by dry stone artist John Bland, the winning project following a call for artists in 2019 to propose ideas for something to mark the 20th anniversary of efforts by the Association for the Protection of Angell Woods (APAW) to protecting the green space.

“It took three months to complete everything,” Bland told Global News. “Approximately one and a half months of gathering stones out of the woods, and another month and a half to build.”

Bland said the rocks were hauled from the surrounding bushes using a dolly, then he chopped and carved every one of them into shape using axes and chisels.

“I wanted to leave as little impact as possible on the forest,” he explained, saying he wanted to respect APAW’S mandate to maintain the natural aspect of the 85-hectare woods.

“They’re all about protecting the woods and wildlife and habitat,” he said.

According to John Williams, a member of APAW’s executive, what makes Bland’s creation so special is that it seems to blend right into the landscape.

“And also, the wall provides an environment for small animals — chipmunks, probably snakes coming to hunt the chipmunks and I’m sure salamanders will find a place there, too,” he smiled.

Read more:
Montreal buys out another developer in bid to protect Angell Woods

The fate of the land has been an ongoing dispute between environmentalists and developers for decades.

The City of Beaconsfield names it one of the most important wooded areas on the island of Montreal. A description on the city’s website says the forest has one of the most extensive wetlands. In 2015 the woods were officially designated for permanent protection and conservation as a nature park by the City of Montreal.

“This is a part of the Grand Parc de l’ouest, which is just recently declared by the City of Montreal,” Williams said.

Bland said the design was his wife’s idea. He joked that when he started building it, passers-by thought he was nuts.

“People would just walk by and look at me and give me the squint,” he laughed.

Now that the work is complete, it has become a destination spot of sorts. Beaconsfield resident Liam Dixon pointed out that his Goddaughter was just at the wall three days ago.

“Unknown to us, her now fiancé Duke came in and used it as a backdrop for getting down on his knees and, apparently somebody’s got a picture of him on his knees proposing to her,” he smiled.

“People are hearing about (the wall) and they’re coming here looking for it, so it’s fun to tell them about it.”