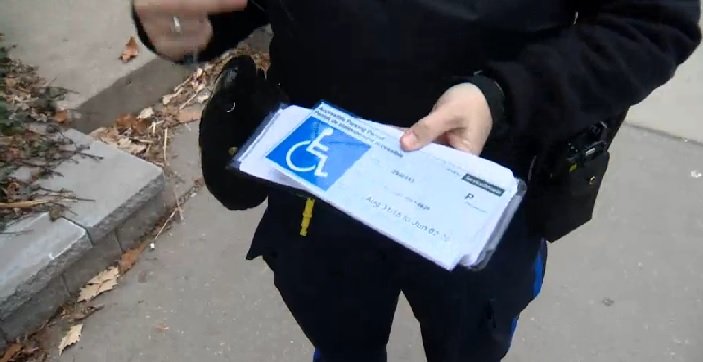 TORONTO – Abuse it and lose it: that’s the name of a new enforcement blitz by Toronto police aimed at catching drivers who cheat the system by misusing accessibility permits and parking in designated accessible parking spots.

The campaign was launched Monday after Toronto police noticed a spike in the number of tickets being issued for accessibility parking and permits infractions.

“We are seeing a major increase in the down town core of persons misusing the permits,” said Kirsten Edgerton, Toronto police parking enforcement officer.

“We see an influx in the amount of disabled permits throughout the city and they are congesting our traffic and we are out there making sure the people who are entering and exiting the vehicles are legit and they are the permit holders.”

Const. Glenn Pitters was on hand Monday when a Toronto driver was caught with a fraudulent permit.

“She might get a fine or a suspended sentence,” Pitters said.

“She was upset at the fact that it was her first time using it and she got caught. We are here to make sure that no one abuses the system.”

“We need to educate the public properly. We are not just out there enforcing, we are out there doing everything we can to ensure everything is moving and flowing in the proper manner,” said Edgerton.

The campaign will run till Feb. 21.