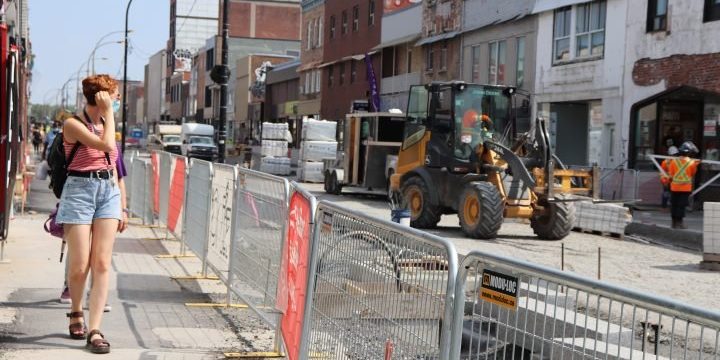 It’s a challenge being a merchant in the Plaza Saint-Hubert and not just due to the COVID-19 pandemic.

The shopping destination on St-Hubert Street is part of a $50-million construction project put in place by the city back in 2018.

“It is a blessing in disguise,” said Véronique Lortie, designer and co-owner of Dracolite, a shop selling medieval merchandise on the Plaza. “When the work will be done, the Plaza Saint-Hubert will be spectacular.”

“This is a very huge investment from the City of Montreal,” said Luc Rabouin, executive committee member responsible for Montreal’s economic and commercial development and design.

The project’s goal is to revamp the Plaza’s look, installing wider sidewalks and a new overhead awning. Their sewer and water systems are also being updated, leaving merchants and shoppers having to navigate through street closures and tight walkways.

Construction has now moved to the Plaza’s south side, between St-Zotique and Bellechasse streets, but it had slowed down this spring when work came to a halt because of COVID-19.

“The City of Montreal could have done a lot more and could still do a lot more (for its local businesses),” said Marc Fortin, president of the Retail Council of Canada (RCC).

Fortin says the city is not communicating enough with Plaza Saint-Hubert merchants regarding the street’s construction plans.

“A week ago we couldn’t even get out of the shop because they were doing the sidewalks,” said Gabrielle Laïla Tittley, owner and designer of Pony, a pop-up clothing and accessory boutique on the Plaza.

Despite construction and the pandemic, Tittley is optimistic. Pony is moving to a bigger and permanent location in the Plaza next month.

“(The Plaza’s) been struggling for a while, but I really have hope,” she said.

The Plaza Saint-Hubert Merchants Association told Global News that work is going so well it expects to catch up the eight-week backlog of construction. It hopes that streets and sidewalks will be completed before the end of September.

“The construction itself was already affecting businesses but businesses knew it was coming,” said Mike Parente, executive of the association. “Then COVID hit…unfortunately, there’s no way we can really prepare for (that).”

The association now provides merchants with masks, visors and antibacterial products to curb the spread of the novel coronavirus.

“As always, (the Merchants Association) did what they could to help us and other businesses understand the mixed messages coming from the government,” said Josh Gendron, co-owner of La Cale, a zero-waste pub in the Plaza.

After taking precautions to make their bar safe for customers and staff, Gendron says people are still afraid to go out due to what he describes as the “bad press” bars received. Recent media reports of spread of the virus among people going to bars has scared customers away, he added.

“I think it’s a disservice to our sector of operation because some of us really respect what’s going on right now,” he said.

Extra help to weather the storm

Plaza businesses have had other help from the city through the PRAM – Artère en Chantier program.

This program allows businesses in the midst of major underground infrastructure work to receive financial help from the city in order to continue attracting customers and investors.

The city received 131 applications under the program and awarded a total of $6.5 million in grants.

“It’s a very big difference for a small businesses between a loan and a grant,” said Rabouin. “Because a loan they will have to pay back.”

The city along with Plaza Saint-Hubert’s Merchants Association, Desjardins, and La Ruche also launched a financial campaign to help businesses along the stretch during the pandemic, called Solidaire avec la Plaza St-Hubert.

For every $20 voucher purchased by a customer at the Plaza, the city provides an additional $10 to spend.

“There is definitely very motivated people working at Plaza Saint-Hubert’s Merchants Association,” said Tittley. “They are really helping us out.”

“As soon as we were allowed to reopen, we did,” said Lortie who continued selling her merchandise online during the pandemic. “We sell internationally on the internet every day.”

At the start of the pandemic, the city also helped local shops create websites in order for them to sell online.

“It was a way for some of them to be able to still be open even if they were closed to the public,” said Rabouin.

“A lot of them with the street closure cannot even get the Purolator or UPS to come pick up their goods in their store to deliver them,” he said. “(The city) needs to sit down with business…and not take blind decisions.”

Aside from construction hindering delivery services on the Plaza, Fortin explained that having a website is in fact a great first step, but it can’t stop there.

“There’s a step two…(The city) is not helping them with consulting an agency to make sure that people know about it,” he said.

“We’re a historic street from Montreal,” said Parente. “Considering the situation, I think the city is trying to do their best.”

Lortie, for her part, says she is “very happy” to be a business owner at the Plaza.

“I believe it is a beautiful place in Montreal,” she said. “A place to discover.”