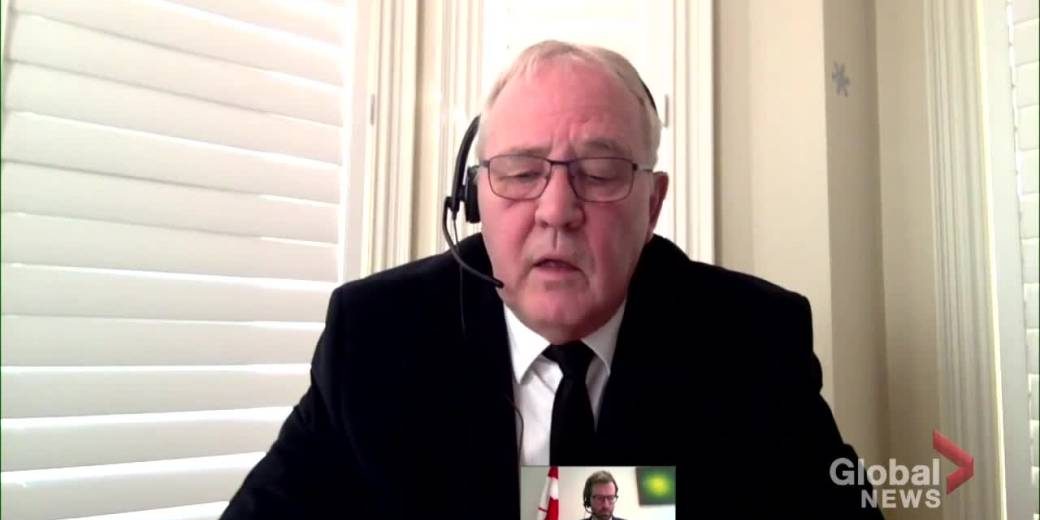 A day after the Proud Boys were added to Canada’s list of terrorist groups, social media accounts linked to the far-right group were still online.

The two main Telegram channels identified by a U.S. extremism research group as those of Canada’s Proud Boys remained active on Thursday.

Telegram did not respond to a request for comment.

“The channels have shared several posts about revolution and urged members to ‘rise up and assemble,’” the Middle East Media Research Institute (MEMRI) wrote in a report circulated to subscribers last week.

“Specific posts have called for the group to make a ‘cohesive plan of attack.’ The channels also predict that Canada will be a ‘major battleground’ in a ‘US vs China based 2nd Cold War.’

The channels have also advertised rallies.

On Wednesday, the federal government listed the Proud Boys as a terrorist organization, designating the group along with a dozen others, three of them right-wing extremist factions.

The announcement came almost a month after members of the Proud Boys allegedly played a key role in the Jan. 6 attack on the U.S. Capitol in Washington, D.C.

Under Canadian law, it is a crime to knowingly participate in or contribute to the activities of a terrorist group. Property linked to listed groups can also be seized.

“In Canada, the listing means that it’s now illegal to facilitate terrorist activity on behalf of the Proud Boys, which could include hosting Telegram channels,” said Jessica Davis, a former Canadian Security Intelligence Service analyst.

“This listing incentivized companies like Telegram to de-platform the group. However, what legal consequences they could face for failing to do so falls into relatively uncharted waters, given the company and its severs are mostly, if not exclusively, located outside of Canada.” 1:51
Proud Boys among 13 groups added to list of terrorist entities by Canadian government

The Proud Boys claim to have chapters across Canada, though they have been in apparent disarray since being linked to the Capitol siege, with the Manitoba chapter folding and the website of the Edmonton affiliate going offline.

Emails sent to several chapters did not garner any substantive responses, but earlier the Toronto chapter responded with a link to a website called Proud Boy Truths, which claimed there was “no evidence we are a terrorist group.”

Proud Boys leader Enrique Tarrio told the Associated Press the terrorist listing was “ridiculous.” He estimated there were 1,000 to 1,500 Proud Boys in Canada and that they had only attended rallies.

Public Safety Minister Bill Blair said the Proud Boys had demonstrated an escalation in violence since 2018 and the decision to list them was based on evidence and the law.

Posts on the Canadian Proud Boys Telegram channels, which each have around 100 subscribers, responded with defiance to being labelled terrorists.

Earlier posts voice support for Donald Trump and falsely claim he won the U.S. presidential election. A video on the channel says the “election was stolen” but “the Proud Boys are here to stay…. we don’t hide, we don’t surrender, we don’t retreat,” the MEMRI report said.

“Our forefathers were considered terrorists,” read another post. “Now they are painting you as a terrorist to scare you into submission.  Fear is the enemy of freedom. Freedom requires selfless sacrifice and courage.”

The Proud Boys were founded by Canadian Gavin McInnes and are described by a Canadian Armed Forces report as an “extremist conservative group” that is “openly Islamophobic and misogynistic.”

The listing on the Public Safety Canada website calls the Proud Boys a “neo-fascist organization” that engages in political violence and played a “pivotal role in the insurrection at the U.S. Capitol.”

“The group and its members have openly encouraged, planned, and conducted violent activities against those they perceive to be opposed to their ideology and political beliefs.”