This Lakeview basketball court is getting a colourful extreme makeover 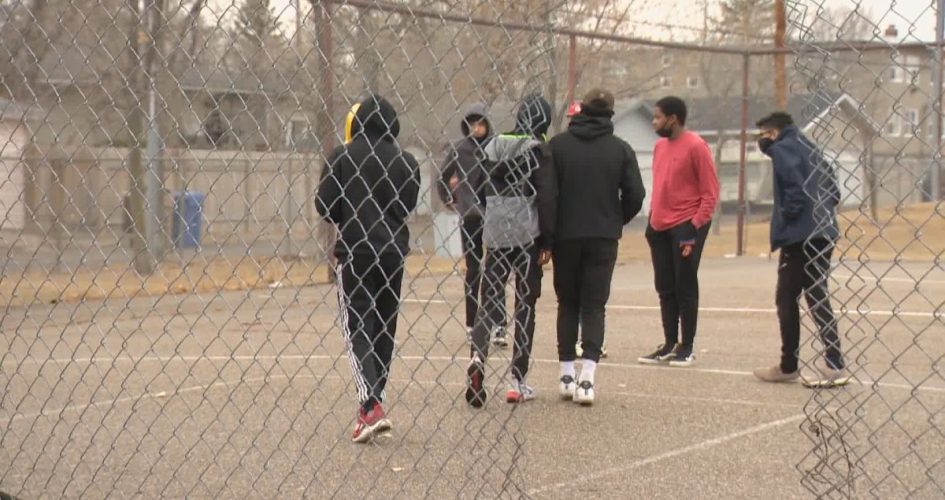 A Regina non-profit is hoping to inject new life into a beloved neighborhood basketball court, but they need a bit of help to make it happen.

“We want this to be the most iconic court on the Prairies,” said Buckets and Borders co-founder Justin Lee. “And we think it will be.”

Justin and his brother Brendan grew up shooting hoops at what is locally known as “the Cage”, an outdoor public court situated behind Sheldon Williams Collegiate.

But over the years the Cage has aged. Now the duo has launched a fundraising campaign to help completely refurbish the facility.

“The court is cracked, and there’s plants growing out of the cracks, the rims are either broken or the meshes are ripped off, the chain link fence is ripped and the asphalt is ruined,” Lee explained, adding that even in its current state the court attracts is often busy with competition.

“I think that having a court that is colourful and welcoming will only bring more people to the court for a destination to play.”

The refurbishing project, which Lee said will cost around $85,000, will include new asphalt, fencing, benches and lights, and refurbished nets.

The highlight of the project though, Lee says, will be a vibrant court-wide mural painted in blue, teal, yellow and red.

The mural was designed by local graphic designer Lucas Howlett.

Lee says that through corporate and charity partnerships and grants, Buckets and Borders has raised about 60 per cent of the funds needed for the project.

They’re now hoping to crowdfund the rest and are planning to begin construction next spring and have the project complete in the summer.

“A lot of people saw the Raptors win last year, and there was a big buzz prior to that. The basketball community in Regina, and in Canada, is continuing to grow. And we think that providing more facilities and courts for youth in our communities will only stimulate more growth and lead to more high level and leisurely basketball in Canada.”

The Lee brothers launched Buckets and Borders in 2015 as a “fun side project” inspired by experiences playing street basketball around the world.

Brendan Lee, a photographer by hobby, would take pictures of courts and players as the brothers hopped from country to country.

“We started it as a blog and Instagram page with the objective of celebrating basketball culture around the world,” Lee said. “What we found with these interactions is that even if we didn’t speak the same language or had totally different backgrounds, basketball connected us.”

When the brothers eventually returned to plant professional roots in Regina, they decided to turn Buckets and Borders into something bigger.

“We thought, what can we do to support the Regina basketball community that has done so much for us?” said Lee.

He said he hopes Buckets and Borders can build off of the momentum of the Lakeview project and complete similar projects in the future.

“We’re still learning what the capabilities of our organization are, but we would love to do more quotes in Regina and in the province,” Lee said. “And then, our big dreams are to bring out this project nationally and then internationally. But now it’s really important for us to bring this project home to the place we grew up playing basketball.”